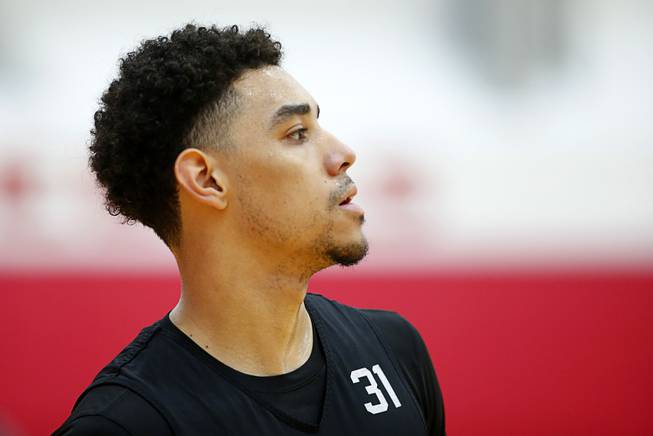 Back from injury, UNLV’s Marvin Coleman is ready to earn it all over again

UNLV’s Marvin Coleman is recovered from a leg injury and hopes to regain his role as starting point guard.

When Coleman was named UNLV’s starting point guard heading into last season, it was a hard-earned honor for the Southern Nevada native. So even as a debilitating injury forced him to stop playing basketball for the first time in his life, he wasn’t willing to get off the court and cede his position to the next man up.

Coleman, of course, was a standout at Foothill High School, but at an earth-bound 6-foot-3 he didn’t generate much recruiting interest at the Division I level. With few other options, he accepted an offer to be a walk-on from then-UNLV coach Marvin Menzies, and against the odds he carved out a role for himself in his first year, providing energy and hustle off the bench.

When Menzies was fired shortly after the 2018-19 campaign, Coleman had to prove himself all over again to a new coaching staff — which he did. Incoming coach T.J. Otzelberger was so impressed with Coleman’s attitude that he awarded him a scholarship during the offseason, and by the end of the 2019-20 season Coleman was starting, posting triple doubles, making clutch shots and ingraining himself as a fan favorite.

That set the stage for last year. UNLV was expected to contend for the Mountain West title and Coleman was going to be a big part of it.

Then he began experiencing pain in his legs. Coleman developed shin splints in the offseason, and the overwhelming soreness and discomfort should have kept him from taking the floor.

But Coleman was determined not to let his moment slip away. Though he was unable to practice, he forced himself to play in UNLV’s first five games, starting at point guard and producing 6.8 points and 3.6 assists per contest.

“Physically it was tough because it was like constant pain in my shin,” Coleman says. “I didn’t practice every day, and mentally it was wearing on me as well. It was just a constant battle every day.”

The hurting was intense, especially after games, but Coleman just couldn’t bring himself to give up everything he had worked so hard to attain.

“It was [the reason], a hundred percent,” Coleman says. “I’ve worked my whole life for this, and to finally get the starting point guard position for my hometown team, it was something I didn’t want to let go.”

Eventually the team’s medical staff took that decision out of Coleman’s hands. He missed the next eight games, but those six weeks of rest did little to improve his condition. Coleman returned to the lineup in January and posted six points and six assists in 21 minutes in his first game back, but afterward the injury became unbearable.

X-rays confirmed that Coleman’s shin splints had developed into a stress fracture, and his season was finished.

For the first time in his life, he wasn’t competing for his spot.

“It was the first major injury I’ve ever had, so it was new for me,” Coleman says. “It was a learning process because I had never not been around basketball for that long. I’ve had minor things like rolled ankles and things like that, but I had never had surgery, so it was definitely new for me. I embraced [rehab] head on and did everything with our athletic trainer so I could get back out there.”

Coleman is all the way back now. He was a full participant in UNLV’s first practice and declared himself fully healthy, with no lingering effect from his injury. And yet he finds himself in the familiar situation of having to prove himself once more.

Coleman lost his biggest champion when Otzelberger left UNLV for Iowa State in the offseason. New coach Kevin Kruger (an assistant under Otzelberger) brought in 10 new players, several of whom will compete directly with Coleman for the point guard job.

Don’t count him out. It’s a battle Coleman has won before and he is more than willing to fight his way up the depth chart yet again, even if he doesn’t view it as a direct competition between himself and his teammates.

“I feel like you have to prove yourself every year,” Coleman says. “Now, especially with a brand-new team with new guys coming in, I think everybody has to prove themselves. It’s a matter of getting myself back on the court and asserting myself into the role that I want to have this season. In a way I have to prove myself, but everybody else does, too.”

Kruger spent the past two years watching Coleman take hold of the team as a leader, and he seems confident that the senior will play a big role this season, whether his contributions are tangible or otherwise.

“The best part about Marvin is that he’s just a basketball player,” Kruger says. “He has an incredibly high IQ, so you can put him at different spots and different rotations … He can help us with the new guys and I think he’s done a great job doing so. Marvin’s value is that he can do a lot of things, so we’re looking forward to everything he brings. We think what he does really does help win games.”

Coleman has gone from walk-on to toast of the town to sidelined by injury. Through the lens of those experiences, he is prepared for anything this season.

“This is my third coach in four years, so I’ve been able to adapt to things,” Coleman says. “Anything that life throws a me, I’ll be able to accept it. That’s life.”