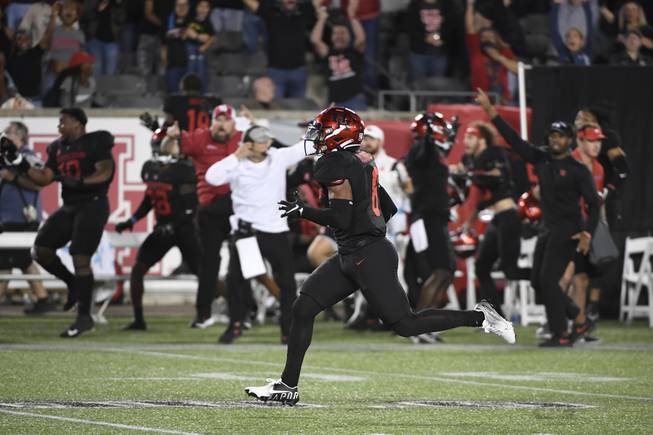 Houston cornerback Marcus Jones (8) returns a kick for the game winning touchdown against SMU during the final seconds of the second half of an NCAA college football game Saturday, Oct. 30, 2021, in Houston.

The commentators knew it, and so did I.

As soon as SMU decided to kick it to Houston’s Marcus Jones, one of the nation’s top returners, after tying the game with 30 seconds left, the result felt destined. Jones went 100 yards for his fourth return touchdown of the year to lift the Cougars to a huge 44-37 victory and ensure a second straight losing week for the plays in the College football by the odds column.

The defeat was the column’s third play the last two weeks that lost within the final minute of the game, and the sixth loss to come by a touchdown or less.

So, yeah, things aren’t going great when it comes to college football. These types of stretches are frustrating but ultimately unavoidable for sports bettors.

It’s all about how you respond. And I’m going to respond by staying the course.

I’ve beaten the closing line soundly in each of the last two weeks despite the poor results, meaning I’ve had positive expected returns that just haven’t materialized. Variance should start to turn and work in my favor at some point, and until then, I’ll stick with the same process.

Read below for picks on every game. Lines are the best available at publication time in Las Vegas on the chosen side. Picks are labeled with three separate confidence categories. The record for the year now stands at 238-224-5 (51-55 on plays, 85-63-2 on leans and 102-106-3 on guesses) picking every Wednesday-Saturday game against the spread.

Ohio State -15.5 at Nebraska, over/under: 64. Nebraska blew another game it had no business losing last week, falling 28-23 to Purdue despite a 93% postgame win expectancy per the SP+ ratings. Because of their frequent follies, there’s theoretical value in the Cornhuskers going forward but it’s hard to count on cashing in on it when coach Scott Frost and quarterback Adrian Martinez can’t seem to get out of their own way. Guess: Nebraska +15.5

Wake Forest +2 at North Carolina, over/under: 76.5. Strip away the wins and losses and these teams have been about equal on a per-play basis. Before the season, the Tar Heels profiled as about a 17-point favorite here and still hold too big of a talent edge for this large of a shift. Play: North Carolina -2.

Michigan State -3 at Purdue, over/under: 52. There’s no reason to get cute here. Yes, Michigan State is in a tough spot coming off a monumental win over Michigan, but that’s more than priced into this line. The Spartans have been better than the Boilermakers in every area this season and should close at least a point or two bigger favorite than the current line. Play: Michigan State -3.

Oklahoma State at West Virginia, over/under: 49. Flip the results of a couple close games — West Virginia is 2-3 in one-score games this season while Oklahoma State is 4-1 — and these teams would be considered evenly-matched. Mountaineer Field is a tough place to play, and this line should be more like a pick’em. Lean: West Virginia +3.

Auburn +4.5 at Texas A&M, over/under: 52.5. This number seems to be in the right place, but there might be some added value in the Aggies coming out of a bye. Texas A&M has been getting steadily better in the last three weeks, even after knocking off Alabama, and now enjoyed time to recover and add more wrinkles. Guess: Texas A&M -4.5.

LSU +29 at Alabama, over/under: 65. It’s the same story with the Crimson Tide every week: Their numbers are a few points inflated by any statistical measure, but they usually cover anyway. Throw in the Ed Orgeron saga — specifically, how the team is dealing with his announced exit — and there’s too much going on to get involved here. Guess: LSU +29.

Oregon -6.5 at Washington, over/under: 51. Washington’s defense may be able to pose problems for Oregon, but it’s hard to see its offense doing anything. The Huskies may have the most uncreative, obsolete run-first offenses in all of the Power Five conferences, a unit that’s set up to fail against an ultra-talented Ducks’ defense. Lean: Oregon -6.5.

Penn State -10.5 at Maryland, over/under: 55. Losers of three straight games with the injury list widening and rumors about coach James Franklin’s future swirling, it’s fair to wonder how much Penn State has left. Maryland has a talented, fresher team that shouldn’t be getting double digits. Play: Maryland +10.5.

Baylor -7 at TCU, over/under: 59. Talent was never the issue with this year’s TCU team, but rather a cultural disconnect with now-dismissed coach Gary Patterson. Perhaps interim coach Jerry Kill will encounter the same problems, but a change in direction could also spark a Horned Frogs’ roster that really isn’t at all that much of a disadvantage to the Bears. Play: TCU +7.

NC State -3 at Florida State, over/under: 56.5. Flip a few close games and suddenly this line would look outrageous. The Seminoles have gone 1-3 in games decided by a touchdown or less — and more like 1-4 considering the ending of last week’s 30-20 loss to Clemson — while the Wolfpack have gone 2-1. Play: Florida State +3.

Tennessee +2.5 at Kentucky, over/under: 57.5. The limitations of Kentucky’s offense have been on full display during a two-game losing streak, as it’s ill-equipped to play from behind. There’s a strong chance the Wildcats will be playing from behind this week against an offense ranked 23rd in the nation by SP+. Play: Tennessee +2.5.