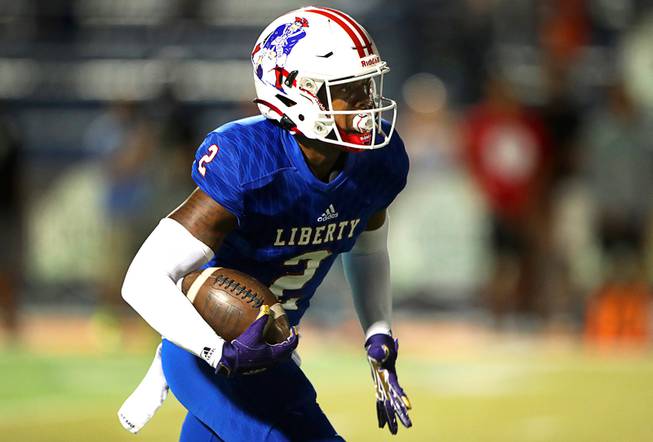 Liberty wide receiver Germie Bernard (#2) runs with the ball after a reception during the first half of a game against Mater Dei (Calif.) High School in the Polynesian Football Classic at Fertitta Field Friday, Sept. 10, 2021.

The Silverado, Las Vegas, Coronado and Shadow Ridge football teams will open the playoffs Friday after receiving a bye in the first round. That brings up a great question: Is receiving a bye into the second leg of the playoffs a good thing or bad thing in high school football? What about momentum? Could that be lost for say Coronado, which has won its last five meetings. We discuss that and more on other edition of Prep Sports Now.

In the final minutes of the Liberty High football team’s 30-8 win against visiting Arbor View in the regional semifinals on Friday, star wide receiver Germie Bernard lined up in the backfield as tailback.

He proceeded to take the hand off and rush 95 yards for a touchdown — the final blow for Liberty in eliminating Arbor View.

Bernard, a three-year varsity player who is committed to the University of Washington, has done a little bit of everything this season. He’s scored on kickoff and punt return, caught long passes for touchdowns and even lined up at quarterback. Yes, he also threw a touchdown.

The logic is simple, coach Rich Muraco explained: “We have to get the ball in the hands of the best player in the state. … We know when we play Gorman and when we play better teams, he’s got to touch the ball more.”

That matchup with Gorman will be next week in a regional championship game two years in the making. Liberty upset Gorman in 2019 to halt the Gaels’ state championship streak at 10 years, but they couldn’t play the encore last year as the season was shelved because of the pandemic.

Muraco wasn’t happy Friday with some of his team’s performance, which included Bernard making an error on special teams that led to a safety and an interception in the end zone by UNLV commit Jayden Maiava.

His message to players after the game: You can’t beat Gorman playing like that.

“We took a step back this week,” Muraco said. “… The kids know. We talk about Gorman all year long, so they know this is what we are fighting for and this is what we want. We will be ready for next week.”

Muraco also gave Arbor View, one of the valley’s top programs, credit for giving them a hard-fought game. Those errors weren’t necessarily all self-inflicted, as Arbor View has college prospects on both sides of the ball.

“My pregame speech yesterday was, ‘Don’t believe the hype,’” Muraco said. “Everyone said we were going to win by 28 or 35 points. (Arbor View) is a proud program. I knew they were going to be fired up and give their best effort because if you are prideful you aren’t going to lay down.”

It was 17-8 in the fourth quarter until Bernard rushed for a touchdown of about 15 yards to extend the lead. Then, he closed the game by outracing the Arbor View defense for the 95-yard score.

“If we make these mistakes we won’t come out on top, but like coach said, we are going to fix it,” Bernard said. “Tomorrow starts a new week. We are going to make sure to put in the hard work to stay on top.”