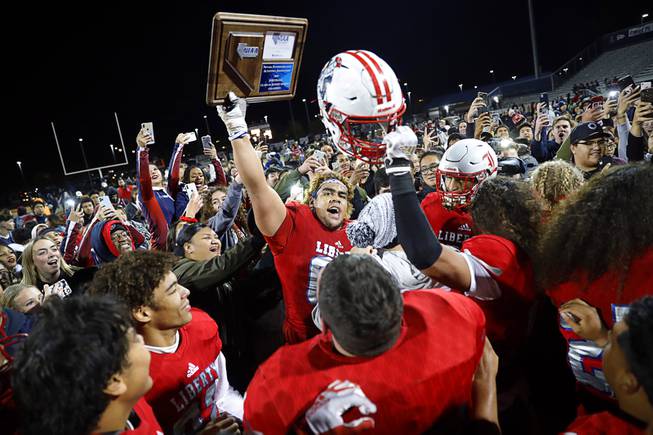 There are two weeks remaining in the high school football season, yet this week feels like the state championship in the 5A classification.

Liberty and Gorman renew their rivalry in the Southern Regional championship game under massively different circumstances than past seasons, as Liberty — not powerhouse Gorman — enters with bragging rights.

Liberty in 2019 became the first Nevada team to beat Gorman since 2008 with a dramatic overtime playoff win on the way to capturing the state title. We didn’t get the rematch in 2020 because the pandemic forced the season to be canceled, bringing us to Friday night at Gorman in a game two years in the making.

Here’s my best guess on who wins and a look at the other games on the playoff docket. This column is 135-30 on the season.

One thing is certain (I think): This game won’t be a blowout as both teams have too much talent for a lopsided affair. There’s a chance Liberty’s Germie Bernard goes off for 150 receiving yards and two scores, and there’s also a chance that Gorman’s Zach Branch does the same thing. Ultimately, the game will come down to motivation. Gorman, for one of the few times since moving to Summerlin in the late 2000s, has something to prove against a local opponent. The fact that Liberty, and not Gorman, is considered Las Vegas’ best program has fueled the Gaels in training the past two years. Friday, they get their revenge. Gorman 43, Liberty 21

Silverado is the runaway favorite to win the class 4A title, but there’s reason for concern this week against Coronado. Week after week of playing on a running clock as the result of beating inferior opponents by the mercy rule hasn’t prepared Silverado for the challenge of the next two weeks. The last time Silverado played a meaningful snap into the fourth quarter was in mid-September when Coronado kept the score close before losing 32-14. Expect another Silverado win in another close game. Silverado 34, Coronado 26

The Las Vegas defense will have its hands full defending Shadow Ridge’s misdirection rushing attack, as JaQuieze Holland has rushed for 1,500 yards and 19 touchdowns on the season. I usually take the team with the best player — that’s Las Vegas’ Adonis Jackson — but the Wildcats will be in for a long night defending the run. Shadow Ridge 43, Las Vegas 18

Anyone have a coin? Virgin Valley is clearly the better team, but the travel to Elko — an eight-hour bus drive and staying the night on the road — makes the teams virtually even. And Elko likely has arguably the classification’s best player in sophomore tailback Eli Finlayson, who has 21 touchdowns and nearly 1,100 rushing yards in nine games. Finlayson usually doesn’t go down on first contact, meaning the Virgin Valley defense will have to have great stamina late. That’s where there could be trouble, as a handful of two-way starters have recently returned from injury and might not have the conditioning in the fourth quarter. Elko 39, Virgin Valley 30

Moapa Valley has been my pick to be the class 3A champions since the summer, especially after the Pirates received a gigantic lift by participating in the truncated spring season. Those reps were invaluable in getting ready for the fall, and in two weeks, don’t be surprised if the nine consecutive months of football ends with raising a championship banner. Churchill County won’t be a pushover, as its offensive line is massive — a rarity for this classification. But Churchill County will have to manage the travel to Overton and an undefeated Pirates squad. Moapa Valley 27, Churchill County 14