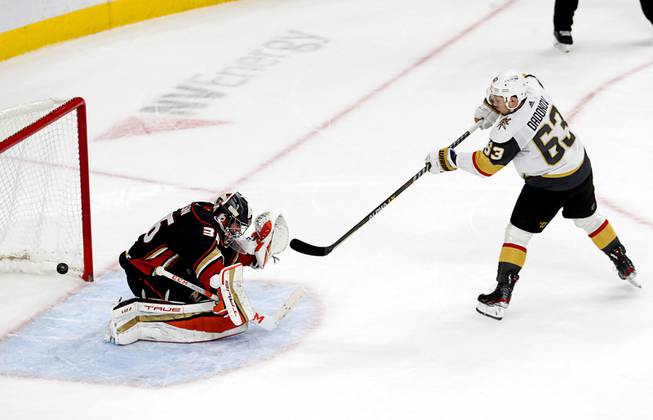 Over the summer, when the Golden Knights traded for Evgenii Dadonov, a consistent 25-goal scorer not too long ago, they were likely envisioning many games like Saturday against the Canucks.

Dadonov had arguably the best of his 15 games in Vegas, scoring twice, assisting on another, and playing strong defense. It took some time for the goals to come, but now that they’re here, we’re seeing the player the Golden Knights targeted with hopes he could become a lethal member of their rotation.

In three seasons in Florida, Dadonov had 28, 28 and 25 goals. He dipped to 13 in his lone year in Ottawa last season, but Vegas was confident the 32-year-old winger would rebound, and traded for him.

Early returns, as they are for many players entering a new team in a new system, were not great. He had no goals and one assist in his first five games, then scored in back-to-back games, but even then those were an empty-net goal and one at 3-on-3 overtime. His next five games came with just one assist, bringing his 12-game total to just four points — none on the power play and no goals at 5-on-5.

“Like all goal-scorers, he’s a streaky guy. They come in bunches,” coach Pete DeBoer said. “When I look back the first dozen games, he easily could have had three or four more on that total too.”

This homestand may prove to be a turning point. He netted his first 5-on-5 goal last week against the Kraken, a momentum-shifting tally that tied the game with 16 seconds left in the second period. Vegas went on to win 4-2.

Then Saturday, he was buzzing. He scored the Golden Knights’ first goal of the game on the power play, putting himself in the right position to backhand home a rebound on the 5-on-3. He had a gorgeous pass to set up Jake Leschyshyn’s first NHL goal, then finished a 2-on-1 with Mark Stone for his second of the game.

“He’s got experience, he knows how to play in this league, he’s been here a long time,” forward Keegan Kolesar said. “Instinctively he’s always thinking offense. Maybe before the puck wasn’t going in for him, but now it seems like he’s getting a good chance every game and he’s making good of it.”

The Golden Knights insist he hadn’t been struggling, just that the goals weren’t coming, and the numbers back that up. Entering Saturday’s game he was third on the team in individual expected goals at 5-on-5 (2.4), as measured by natural Stat Trick of the quality and quantity of scoring chances he had. He was also driving play as well as anyone, as the scoring chances Vegas created with him on the ice (103) trailed only Shea Theodore, Alex Pietrangelo and Jonathan Marchessault.

It’s frustrating, though, when a player brought in to finish chances isn’t finishing. His shooting percentage of 3.6% was a fraction of his career 14.4% rate, and his 28 shots on goal were fourth on the team. Every number you look at predicted some positive regression, which came in the form of his strong game against the Canucks.

“It’s hard to live up to contracts when you’re paid to score goals,” DeBoer said. “There’s a lot of scrutiny around that, and sometimes what gets lost is a lot of the other little things that he’s doing.”

Dadonov does have a fairly hefty contract — $5 million cap hit for this season and next. He and backup goalie Laurent Brossoit ($2.3 million) were essentially who Vegas traded goalie Marc-Andre Fleury for, using his departed $7 million salary to acquire both.

There’s no question the Golden Knights are relying on Dadonov to score. Two years in a row the offense has dried up in the playoffs, leading to a third-round exit. When Dadonov is on, he’s one of the best finishers in the game, and arguably behind only Max Pacioretty as the best pure scorer on the Golden Knights.

He’s been up and down the lineup with all the injuries Vegas has had, but settled in next to the returning Stone on Saturday, and based on Monday’s practice will play with him again tonight when the Golden Knights take on the Hurricanes. On paper it’s a perfect match — a finisher with a playmaker.

Where Dadonov plays when everyone is healthy is a question for later in the season, but he’ll be expected to fill the net wherever he is. That’s why Vegas got him.

“If and when we get healthy and add some of the people back that are sitting out, I think he’s going to consistently score all year,” DeBoer said. “That’s what we’re expecting.”