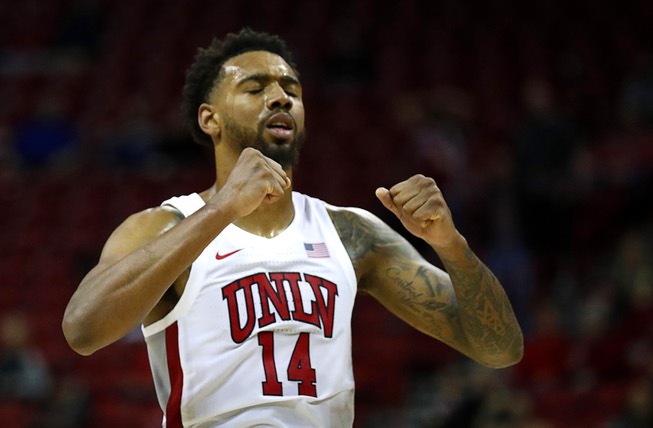 UNLV Rebels forward Royce Hamm Jr. (14) reacts as teammate Donovan Williams is called for a personal foul and a technical with 50 seconds left during the Rebels season opener against the Gardner-Webb University Bulldogs at the Thomas & Mack Center Wednesday, Nov. 10, 2021.

No matter the sport, the makeup of the team or the circumstances, coaches always strive for consistency.

Through three contests, Kevin Kruger’s UNLV basketball squad gets an A-plus in that category.

For the third straight game the scarlet and gray played 40 minutes of tough, hard-nosed basketball, gave Bryce Hamilton the keys to the offense late, and came up with clutch defensive stops in the final minute to secure a win, this time over visiting North Dakota State by a score of 64-62.

It was, in many ways, a replay of the two previous contests at the Thomas & Mack Center. On Saturday Royce Hamm rejected a layup attempt with 27 seconds left to preserve a one-point lead against Cal. On Monday Hamm found himself in a nearly identical situation and once again provided the game-saving swat.

UNLV led 54-52 when Marvin Coleman missed the front end of a 1-and-1 with 10 seconds to play. North Dakota State had no timeouts remaining, so the Bison threw the ball ahead to Dezmond McKinney and he attacked the basket in transition. It looked like McKinney would have an open look at the rim, but Hamm came down the lane and spiked the shot with three seconds on the clock.

Jordan McCabe scooped up the loose ball and dribbled out the remaining time, and UNLV celebrated its first 3-0 start to a season since 2017-18.

“It does eerily feel like the same thing,” Kruger said when asked if Monday’s game reminded him of UNLV’s first two wins.

Another thing all three games have had in common is Hamilton’s ability to close it out on the offensive end. Kruger has been adamant that this is Hamilton’s team and that the ball will be in his hands on critical possessions, and the senior southpaw came through against North Dakota State like he did against Gardner-Webb and Cal.

In the final five minutes, Hamilton hit on 4-of-7 shots from the field and scored eight of UNLV’s last 12 points. Prior to that hot stretch he had been just 4-of-10 from the field.

Hamilton finished with a team-high 17 points and once again rewarded his coach’s faith.

“Bryce has a knack for scoring, getting in there, pivoting, pump-faking,” Kruger said. “His pace changes a little bit [late in games]. It does. That’s on us to figure out how we can get that for every minute he’s out there, but happily he did what he needed to do.”

Hamm only scored three points, but the fifth-year senior pulled down 17 rebounds and blocked two shots, including his rejection on the biggest play of the game.

Hamm’s actual assignment on the play was to defend North Dakota State big man Rocky Kreuser, who had already hit three 3-pointers on the night and was trailing the play for a potential kick-out go-ahead 3.

Kruger’s heart may have skipped a beat when he saw Hamm leave the shooter to help on McKinney’s penetration.

“I saw Royce running and then I turned to watch the ball-handler,” Kruger said, “because I was concerned he was going to stop and turn and throw it to Kreuser trailing. But it looked like [McKinney] had his head down and maybe Royce noticed that he was going for the quick tie.”

Bingo. That’s exactly how Hamm saw the play unfold, and his quick reaction made all the difference.

“I just knew the time and situation of the game,” Hamm said. “I read the guard, saw he was coming down full steam and head-hunting the rim and going as fast as he could. I was like, if I leave the shooter this time I’ve got to make sure I get it. So I just made sure went and made the winning play for my team.”

“That’s two games in a row with game-saving blocks,” Kruger said. “His performance and awareness to help teammates is as good as I’ve ever seen.”