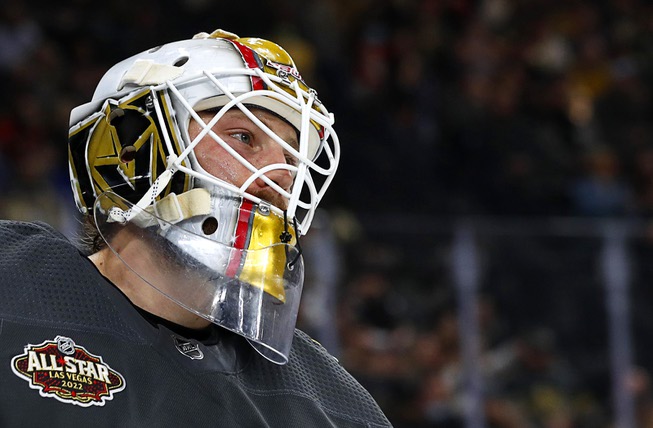 Vegas Golden Knights goaltender Laurent Brossoit (39) is shown during the second period of an NHL hockey game against the Minnesota Wild at T-Mobile Arena Thursday, Nov. 11, 2021.

The Golden Knights’ bench seemed to clear as soon as the horn sounded, and their sticks lifted as high as the celebratory smoke shooting out of the fog machine.

Vegas’ players appeared to be extra proud of themselves after a 3-2 win over the Columbus Blue Jackets Saturday night at T-Mobile Arena, and they had every reason to be. The victory marked the Golden Knights’ fifth in six games to conclude a homestand tied for the longest of the season where “it’s just been one thing after another” in terms of challenges, in coach Pete DeBoer’s words.

“5-1 on a homestand when you’re full-roster, fully healthy is a great run,” he said. “Considering the adversity we had thrown at us…this group’s resiliency – I’ve talked about it before — never wavered.”

The Golden Knights arrived home almost exactly two weeks ago following a 5-2 loss at Detroit just hoping to stay afloat with a patchwork roster. They now leave again for a Monday night game in St. Louis sailing high despite having suffered even more personnel setbacks.

But it’s given them more confidence in different players as the success has required contributions from those typically not relied on as heavily.

Two of Saturday’s three scores came from players who got in the column for the first time this season. Keegan Kolesar broke a Golden Knights’ cold spell for the opening 27 minutes to get the team on the board, and Mattias Janmark put in the game-winner.

The goal in between came from Reilly Smith, who moved into second on the team with seven goals via a shorthanded breakaway early in the third period.

“Super resilient effort in the last few games,” Smith said. “It felt like every game there was something else happening, a little more adversity. For guys to be able to contribute, it’s the world for us because we’re just kind of treading water, waiting for guys to come back and if we’re able to pick up wins and try to create a lot of momentum and movement in the standings, it’s huge for us.”

They have been able to do that considering Vegas now sits in a playoff spot at 11-7-0 after the successful homestand. That may not sound like much for a team considered a Stanley Cup favorite coming into the season, but they were far out of the postseason picture after a 1-4 start and even at 6-6 following the aforementioned Detroit loss.

The victory over the Blue Jackets was in many ways a microcosm of their season — started slow, picked it up in the middle before playing their best right before skating off the ice. Vegas gave up two first-period goals, including one by Gustav Nyquist in the opening minute, and it looked like the long homecoming would end with a whimper.

“It seems to be where we like to start a lot of our games,” goalie Laurent Brossoit said. “It puts a fire under us, and we get better as the game goes on, which is a good sign. I think we’ve got a very mature group, and when we get down, we don’t pout. We still stick to the game plan and the process and always have a chance to win.”

Brossoit made his second appearance of the homestand, and ultimately improved to 3-1 when he’s starting in relief of linchpin Robin Lehner, who’s arguably been the Golden Knights’ best player. Brossoit missed a deflection on the first goal but he was left out to dry on the second.

Alexandre Texier beat Mark Stone, the team captain adjusting to only his second game back since injury, down the ice after a faceoff for a breakaway, shorthanded goal. DeBoer said the Golden Knights were also distracted in the first period from yet another hurdle.

Center Brett Howden had a false positive COVID-19 test and wasn’t cleared to play until the last minute after having not even taken the ice for pregame warmups.

“It’s a testament to our character, especially with how many injuries we have, injuries to core guys and a couple COVID guys go down,” Brossoit said of the win. “It just shows that our young guys are stepping up.”

Vegas had its sixth player of the season make his NHL debut on Saturday in 22-year-old former seventh-round pick Ben Jones. He didn’t register a point but his counterpart from the Golden Knights’ 2017 draft who debuted earlier this season, Jake Leschyshyn, got the second assist of his career on Kolesar’s goal.

Help is on the way but players like Leschyshyn are making sure injured stars like Max Pacioretty and Shea Theodore, both of whom skated in practice Saturday, won’t need to rush back and feel pressure in a dire situation. Five wins in six games has put the Golden Knights in a better position than they’ve been in all season.

“We’re finding ways to win games,” DeBoer said. “I don’t know if we’re hitting a stride. I can’t wait until we’re healthy and we can put a full lineup of guys that we have and then we’ll see. It’s going to be on those guys coming in to jump in and continue on with the foundation we’re playing with right now.”