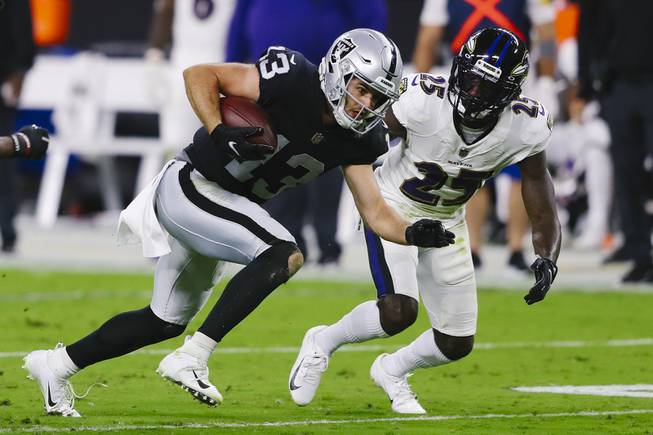 With one of the best tight ends in the league (Darren Waller), a Pro Bowl running back (Josh Jacobs) and a traditional fullback (Alec Ingold, before a recent knee injury), the Raiders’ offense has no dearth of short-yardage options.

And yet, their go-to guy in such situations all season has been an undersized receiver many once regarded as too slow to make it in the NFL. The 5-foot-10, 185-pound Hunter Renfrow has been Las Vegas’ most reliable weapon through the first half of the season and led the team with four receiving touchdowns through nine games.

The Raiders realized Renfrow’s shiftiness immediately upon taking him out of Clemson in the fifth round of the 2019 NFL Draft and utilized it in each of his first two seasons. “Third and Renfrow” became a catchphrase for the team, with Las Vegas frequently targeting the slot receiver on third-down situations in 2019 and 2020.

Opponents knew looks designed for Renfrow were coming, yet still couldn’t stop them. While that has continued in his third season, he could also just as easily have a new nickname—“Red Zone Renfrow.”

The Raiders have gone to Renfrow near the goal line as much as any other player, with strong returns. All of his touchdowns have featured him juking defenders senseless, using elaborate footwork on double- or triple-moves to shed coverage on choice routes where he has autonomy about which direction he ultimately heads.

Some of the successful hijinks Renfrow has pulled on routes in games include quasi tap-dancing and fake falling-over, but quarterback Derek Carr says the receiver goes even more over-the-top in practice. In one-on-one drills when the other receivers are running conventional routes with Carr, Renfrow uses the time to “push the envelope,” according to the quarterback.

Renfrow tries out some things that puzzle even Carr, who has to veto some of the moves because they don’t work with timing and protection. But he appreciates them all.

“It’s fun to come up with those ideas, and it’s fun because he pushes my creativity,” Carr says. “He’s probably the most creative teammate I’ve ever been around.”

Carr has also called Renfrow one of the best route runners he’s seen, and he’s not alone in showering him with that praise. That’s long been the book on Renfrow and the primary reason he got a professional shot at all despite NFL.com’s scouting report going into the draft knocking him because he “lacks size and speed.”

Renfrow uses his frame to his advantage, however, and is incredibly nimble off the line to cover for any disadvantages when playing against faster defenders. He’s also skilled at making them miss once he gets the ball by employing his unorthodox angles and moves.

“Being in the slot position, you have more room, so it’s easier at times,” Renfrow says. “You kind of see the picture paint itself and see where the defenders are.”

Deflecting compliments is vintage Renfrow, whose soft-spoken demeanor matches his diminutive stature. He’s about as unassuming as professional athletes come.

Coming into the season, he joked that he had only ever talked trash on a couple occasions, then “felt bad for it” afterwards. He doesn’t need to share words, though, because his abilities frustrate opponents enough.

Renfrow made so many big plays with six catches in a Week 1 victory against the Baltimore Ravens that, in the eyes of the Raiders’ coaching staff and front office, defenders retaliated with a series of dirty and late hits.

The organization filed a complaint with the NFL, and though the league levied no discipline, news of the grievance might have helped prevent other teams from being overly physical since. Either way, he has stayed healthy in the midst of a breakout year.

Renfrow has drawn on a lifetime of sports experience to improve this season. He cites playing basketball and soccer as a reason for his “spatial awareness” against different coverage schemes.

Carr and Bisaccia say it’s something else from his youth that has provided Renfrow a leg up as a receiver: He was a standout prep quarterback playing under his father, coach Tim Renfrow, at Socastee High School in Myrtle Beach, Florida. That has provided Renfrow with a better understanding than most receivers about where he needs to be to most benefit Carr, according to Bisaccia.

Instead of attending a smaller college and continuing to play quarterback, Renfrow walked on at Clemson and became a legendary receiver. He was a part of two national championship teams, catching the game-winning touchdown in the title game against Alabama in 2017.

He might have profiled as the type of college star who couldn’t hold up in the more physical, faster-paced NFL, but he quickly outpaced those expectations. He has become more than the Raiders ever imagined.

Raiders’ offense running out of time to turn season around