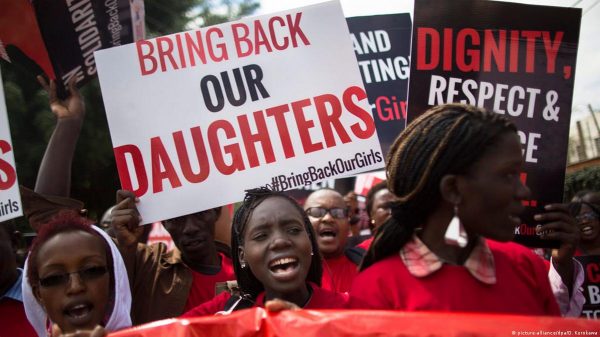 The 108 still missing Chibok schoolgirls kidnapped by Boko Haram in Nigeria in 2014 are remembered in a new exhibition of sculptures in Lagos. The faces of the 108 Chibok girls who are still missing nearly nine years after their abduction by Islamist insurgents have been sculpted in clay in a collaboration between French artist Prune Nourry, university students, professional potters and the families of the victims.

The artwork is inspired by ancient Nigerian Ife terracotta heads and the Exhibition is titled, “Statues Also Breathe.” The sculptures recreate the faces, facial expressions and hair patterns of the girls.

In 2014, 275 girls were seized from the Government Girls Secondary School in the Chibok community in northeastern Nigeria. The mass abduction prompted global outrage and heartbreak where the slogan #BringBackOurGirls was conceived. Former U.S. first last, Michelle Obama, and numerous other leaders advocated for their return.

Around 160 of the girls have been released since then, many after years of captivity, but the story has faded from the headlines, losing political momentum. Now president, Muhammadu Buhari, left families hollow when he promised to rescue the girls eight years ago as a political scheme to obtain power. Babagana Monguno, the nation’s national security adviser, said in early December that the military is dedicated, but that it is an “”intelligence-driven process, which means it is going to be, unfortunately, painstaking”.

Habibat Balogun, the Bring Back Our Girls Lagos Coordinator said, “It’s a permanent reminder that it happened, we had a period in our history in Nigeria where women, boys, men, children were taken away, some were recovered, some are still displaced till today, some are still in captivity.”

French artist Prune Nourry collaborated with 108 students from the Obafemi Awolowo University and family’s of the missing girls lended photos of their daughters for the portraits. He then designed eight heads, inspired by the photographs, and students sculpted 108 more.

Nourry’s hope for viewers of the exhibition is that they will, “remember the importance of girls’ education, then the fact that sculpture can personify someone and catch the breathing life and the symbol of someone, of life.’

The Chibok community still suffers attacks from Boko Haram and its breakaway faction which has pledged allegiance to the Islamic State group. Art pays tribute to this largely forgotten tragedy in the midst of even more heartbreak. The sculptures are currently stationed in Lagos, but are expected to travel a world tour in the coming years.

The Source |University of Idaho Murder Suspect Arrested in Pennsylvania